Oftentimes things in our Lives stress us, and make us feel out of control.

Big things — or small — they can throw us for an emotional loop.

I was experiencing one of these stressed-out pockets, several years back, when I received my clear, peaceful, answer in the form of two dreams.

As I recall them now, they still ring true.

And they still help me overcome the temptation to live my life in anger or fear, which ruins so many aspects of my much preferred, much appreciated, Peaceful Life.

But what does this have to do with Condors?

I’m pairing this Post with photos I shot of soaring Juvenile California Condors. (Info about Condors at bottom of Post.)

The Easy Solution and the Pilot Dream

The following two dreams arrived together, side by side, one night.

At the time I was struggling with some pressing issues. I went to bed, asking the Divine for an answer to come in my dreams.

After awaking in the wee hours, I prayed again, and fell back asleep.

Here is what I recall —

I asked for dreams, and I got them.

These were very vivid, lucid dreams, the prophetic types, not the every-night ordinary.

In recent days I had been praying to be shown God’s EASY SOLUTION to my troubles, rather than struggle on in difficulty, like I had been.

There was a waterway channel. I was walking in the water. It lead me inside a large industrial-type multi-level room, also filled with water. I knew I had to get out.

I saw a window and struggled to open it — impossible. A lady tried to help. But no matter what I did, it appeared I was stuck there in the building.

Looking around, I figured I could trudge down and across another deep, watery area, but I knew it would be very difficult. And it probably wouldn’t work.

Then, I saw a little button, off to the side. It contained the answer!

It turned out to be easily pushed. I did, and a door opened to a girl in a room (like an elevator operator) — and somehow, from there, I was able to just walk out.

God ALWAYS has an Easy Solution to our problems. (A type of button, nearby, that we can push — rather than continue fretting and struggling on our own).

He is a very present help in our times of need.

Rest in Him. Don’t wear myself out trying to solve everything by my own energies.

Putting the Easy Solution to work

And I was able to put this to work, again, just the other day.

On my precious weekend-day-off, I had offered a favor to a family, with a visit to my horses. It meant days of planning and prep work, which I did. Getting horses out and ready. Nailing on shoes. Driving my horse in his cart . . .

All was set and confirmed. At the appointed time, I was booted up and ready to go.

Yet, right then, I found out — they were running late. Our time would be delayed by two hours. Maybe more.

I was upset. It threw off all my plans for the day.

But, I couldn’t change it.

So I decided to look for the Easy Solution :))

First, I got out my handwritten journal and wrote a good rant. All about flakes (it seemed to be the theme of the week — people who made appointments with me and just disappeared, with no further mention!)

Then, I laid down on the couch with some uplifting reading material — and drifted off into a beautiful, out-of-this-world, time-traveling, supernatural nap.

Rather than get mad. Chill out — take a nap!

Then came the airplane. We were on a boardwalk. Lots of people were there. I had joined up with some people I didn’t really know. There were people giving out cups of juice because something that was scheduled didn’t happen.

I walked up and asked them what was going on. There were a couple of military guys, one in pilot headgear. He was in a small booth, like a ticket booth, with his flight helmet on.

Then I asked him if he prayed?

Suddenly, as if in response to my question, I was up on his plane with him. It was like the dragon in the movie, Eregon — a blow-up type vinyl airplane. And we rode astride, on its back, he in front, me behind — like you would on a horse or a motorcycle.

He directed the craft into all kinds of high-tech flying maneuvers. Loop-the-loops. Stalls. Showing off for me. For the crowd. I wondered how it was possible that we even stayed on?

Then, in response to my question of whether he prayed, he put the thing into a DIRECT NOSEDIVE.

It became apparent that he wasn’t pulling out. We were headed straight down.

I literally clung to the flapping tail, hanging on for dear life. I wondered what the people on the ground would think – we were going to crash and die, right in front of them.

Then I heard a voice inside my head say: “Look what God can do!”

And right when we should have hit, right when we would have perished — in the gentlest of manners, he landed his plane PERFECTLY, flaring at the very last moment, touching down softly on the grassy ground!

We were not hurt!

I was so grateful, and praised and thanked God, repeatedly, for saving us!

No matter how bad it looks, The Divine is in control — and there are NO WORRIES. (Even though I must constantly remind myself of this!)

For, even in the nosedive, God sorted it — gentled it, and saved it.

With this dream, He lead me to a higher level of understanding. A deep inner knowing. “With God, ALL things do work together for good.”

Prayer is the key. And calm trust.

How these dreams have helped me

Over the years, these two dreams have profoundly influenced my day-to-day Life.

When frightening things happen, when it seems all chaos is breaking out — I look for the Easy Solution God has for me. And no matter how bad it appears, I know that He is in control.

Calm down. Chill out. Rather than fight and fume — Enjoy the Ride of Life.

Ride the airplane. Ride the dragon.

Condors are so rare, I’ve seen them only once before, about fifteen years ago, soaring high overhead — and I’ve lived here in Condor territory for 25 years, and spent countless  hours, out and about, on foot and on horse. I photographed these on 4/22/19, Earth Day, on my way driving home from horse hoof work :))

They were young, happy, on the wing — soaring as if just for fun, in the end of day light, over a great expanse. An amazing bird sighting — especially since fewer than 500 birds exist in the world. What a day!!!

I was most amazed by the long, dangling feet. Maybe the young ones just don’t know how to retract their landing gear yet :))

Juvenile Condor in flight, feet down :))

I watched four birds, soaring over an area of about a quarter mile. Some going up, others dipping down. Very difficult to focus my camera. Stunning. Breath-taking. Inspiring!

One flew right overhead to check me out — making me think that they must have had some positive interaction with humans from the release program at Bitter Creek.

California Dept. of Fish and Wildlife:

Looks like an airplane with gear down, and winglets (also known as a wingtip device) 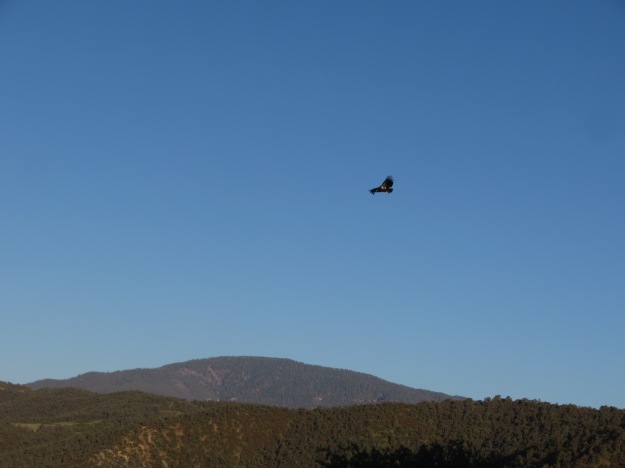 Please comment, and let me know about your Condor or wildlife encounters :)) 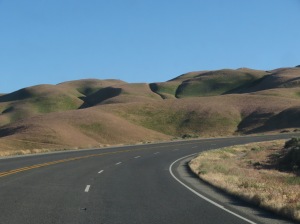